Monte Carlo and Simpson Marine Present the MC4; a Vision of Luxury and Grace in a 43’ Package

First in the Monte Carlo range, the 43’ MC4returns to Cannes Festival of Yachting September 9-14, 2014. This stunning combination of Italian design and French know-how has produced a revolutionary new yacht that displays at the top of her class at one of the most important boat shows on the calendar.

Classic, innovative, and highly seaworthy the Monte Carlo concept confirms the success of the French-Italian alliance. The MC4 shares the same hull design as the MC5, which is optimized for safety and good seakeeping and was developed for the Volvo IPS propulsion system from the start. Engines are available in 400 or 500HP according to owner preference and can give a top speed up to 29 knots.

The MC4 is designed to meet the expectations of a diverse clientele, offering great living spaces which are flooded with natural light and perfect continuity between interior and exterior areas. From the rear of the cockpit to the pilot seat everything on the main deck exists on a single level. Large glass doors disappear to create wonderful living spaces and the galley can be modified to suit any need.

The saloon seats six and the textures of tanned leather, brushed wood, and unique fabrics combine in harmonious soft shades. The beautiful décor and large open spaces extend to the forward VIP and full beam aft master cabins, which are both very bright due to the many large portholes gathering in natural light.

At sea the elegant lines of the MC4’s profile are highlighted by the huge flybridge and when you are onboard the MC4 you really feel that you are on a yacht, making it truly unique and truly Monte Carlo. 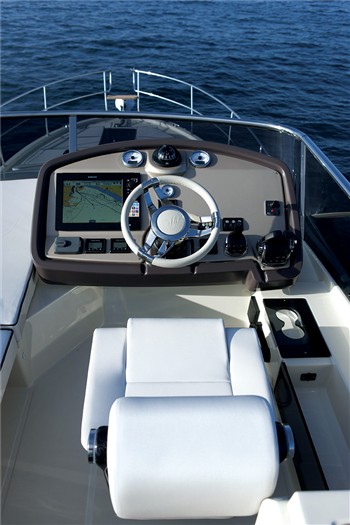 Simpson Marine receives an MC4, along with her bigger sisters the MC5 and MC5s, and all will be available for your perusal in September.

After building over 260 Lagoon 400’s Beneteau Group’s multihull division has applied their expertise to give their 40’ model a new lease on life.

Designed for coastal or ocean cruising in luxury and style the absolutely modern Lagoon 400 S2is even more welcoming and has a greater level of comfort than her predecessor. 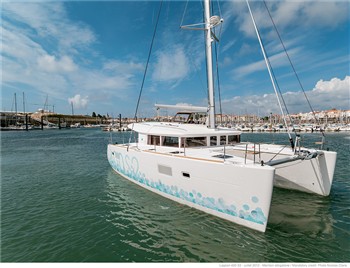 The new model has had the interior completely refitted by the wizards of Nauta Design. The boat has incorporated higher quality materials and changes suggested by previous owners to create a yacht that can accommodate up to eight in either three or four cabin layouts with an elegantly fitted, and spacious interior. The bunks have been widened and the owner version has a desk and a couch in the owner’s stateroom.

The salon too is more spacious than before and there is plenty of natural light. All interior cabinetry is the best Alpi sustainable wood. The large galley is adjacent to the entertaining areas of the boat.

Above decks she demonstrates well-known Lagoon expertise with gull-wing bridge deck for a nicer ride in heavy seas, rigid bimini for maximum protection, and the cockpit and salon sit on the same level. The design gives easy and safe movement around the deck so the owner can enjoy the big cat’s performance under sail.

Contact our Group Sales Manager for Lagoon, Richard Allen atrichard.allen@simpsonmarine.com or +852 2555 8377 and experience for yourself the luxury of the world’s most popular multihull.

Cruising division honours in the Freemantle to Bali Yacht Race were awarded to Don Booker and his crew aboard the Beneteau Sense 50 Dorade. The Sense, already a proven bluewater cruiser/racer, demonstrated her abilities again, battling huge seas and 33 other teams to come out on top in this challenging 1440nm race.

Testament to the capabilities of the Sense 50Booker’s crew where mostly dinghy sailors, each of whom had little, if any, ocean sailing experience under their belts. 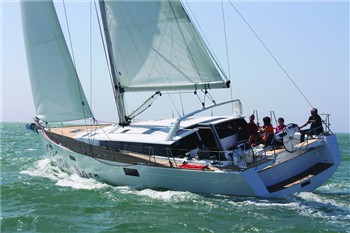 After early delays due to bad weather the fleet had following winds for most of the trip. But coming on the tail end of a storm the huge seas were not for the faint of heart. Don had never had Dorade out in such large seas. Hitting a max of 16.5 knots running down the face of a large wave in the dark found him very nervous indeed. Captain Don said, “The comforting thing is the boat just handled it so well.”

Even with no spinnaker the team kept up with the cruising division boats and finished the course in 10 day pacing an average of nearly 150nm/day – all while fishing along the way.

Don’s wife, Darinka, also enjoys yachting and they explained that they chose the Sense for a couple of key features, not the least of which is the multihull-style accommodations with large windows, light, and the lack of steep stairs into the saloon like most monohulls.  “We really liked the room in the cockpit and the saloon layout, as it feels just like the space you get on a powerboat. Darinka really liked the kitchen layout, and I knew that the Beneteau sailing pedigree would ensure it was a great sailing boat”, said Don.

Simpson Marine will try to catch up with Don and Darinka when they return from some more leisurely cruising in the beautiful Abrolhos Islands of West Australia. Until then come see our brokers and try out a Sense for yourself.

The Beneteau Sense 50 has taken home Best Production Sailing Yacht (under 51 feet) trophy at the Asia Boating Awards 2011, the Cruising World Boat of the Year 2011 Full-size cruisers 50 to 55 feet Award, and was nominated for “Luxury Cruiser” for European Yacht of the Year 2011/12.